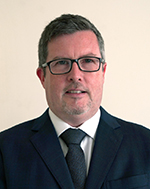 David Holloway is a Professional Consultant at the Chinese University of Hong Kong (CUHK). Mr Holloway is a specialist in international trade law and international commercial dispute resolution. He has over 20 years experience of practice in those fields at the English Bar and has also been teaching and researching in these areas of law for much of that time.

Mr Holloway is a tenant member of Outer Temple Chambers (London and Dubai). He has conducted litigation in the higher UK Courts (including the House of Lords) and before international Courts (such as the DIFC and ADGM Courts in the UAE). He has extensive experience of representing clients in international arbitrations under most institutional rules (and in ad hoc arbitrations) and of proceedings ancillary to arbitration (applications for interim relief, jurisdictional challenges and contested enforcement proceedings).

Throughout his career Mr Holloway has developed particular experience of the oil and gas industry and has been involved in several substantial disputes arising from oil exploration projects. He also has extensive experience of insurance and reinsurance disputes (particularly in the marine and energy sectors), disputes involving sale and carriage of goods, joint ventures and construction projects. He has been instructed in several cases involving State parties and in various matters involving public international law including claims arising under bilateral investment treaties and disputes involving issues of State Immunity before national courts. He has been ranked as a leading junior counsel at the English bar by Chambers and Partners and the Legal 500 directories.

Since 2008 Mr Holloway has been the co-author of Schmitthoff, the Law and Practice of International Trade (Sweet & Maxwell 11th and 12th editions) and will be one of the main editors of the forthcoming 13th edition. He has also been the General Editor of International Arbitration Law Review (Sweet & Maxwell) since 1998. He has published widely on matters relating to international trade and international arbitration and is regularly invited to speak at academic and industry conferences. He has also delivered various training courses to lawyers, judges and commercial professionals in the UK, Asia and the Middle East.