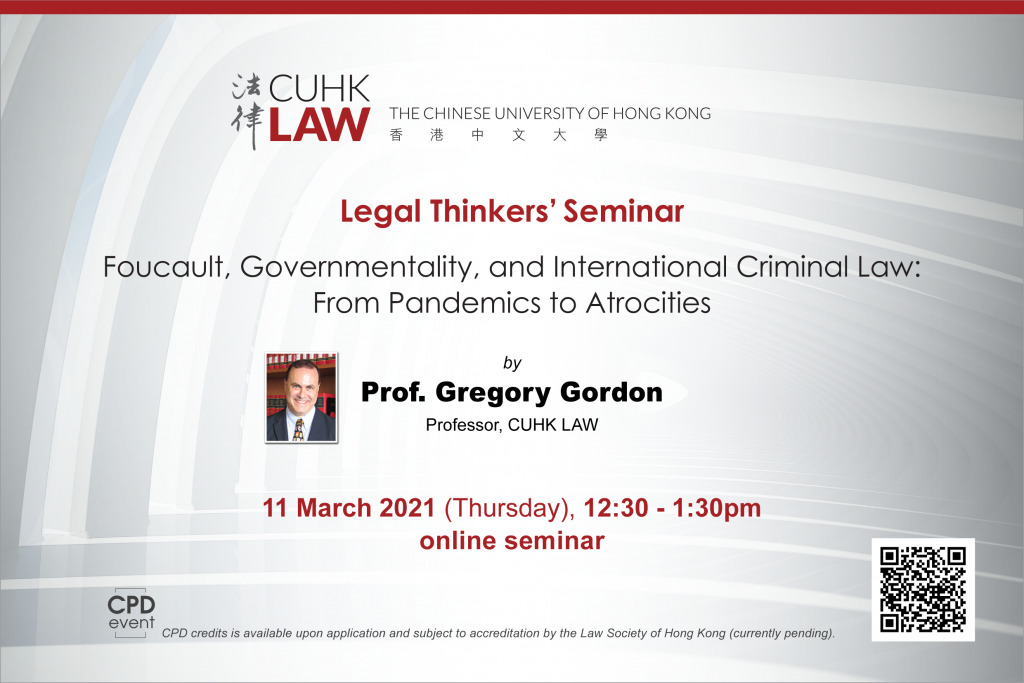 CUHK LAW announces the fourth Legal Thinkers’ Seminar ‘Foucault, Governmentality, and International Criminal Law: From Pandemics to Atrocities’, to be held on 11 March 2021, 12:30pm – 1:30pm. It will be delivered by Prof. Gregory Gordon, Professor, CUHK LAW.

Abstract:
Conventional accounts of the genesis of international criminal law (ICL) emphasize the desire to hold individuals accountable for atrocities and grave breaches rather than let them hide behind the veil of the State. But a vein of important scholarship relying on the work of French philosopher Michel Foucault, has called this conclusion into question. Far from viewing ICL as a crusade to end impunity for mass atrocity via individual responsibility, it perceives it instead as a product of more sinister and less visible forces – globalization arising from nation-states and multinational private interests seeking maintenance of institutional order on a supranational scale. This scholarship typically offers philosophical support for its critique of ICL by citing Foucault’s seminal work “Discipline and Punish: The Birth of the Prison,” for the proposition that ICL actors create a “political economy” of punishment, bureaucratizing and routinizing it, and thereby normatively ingraining it into an emerging globalized social body. This strain of thinking seizes on one of the central tenets in Foucault’s philosophy, the notion of “power,” and reductively translates it into a naked exercise of institutional “control” over individuals. Seen from this narrow perspective, ICL merely represents an extension of statist coercion on a collective scale. This paper takes issue with this Foucauldian interpretation of ICL. Rather than treating “power” negatively as a function of coercion, it turns to the later development of Foucault’s thought emphasizing power as “governmentality.” Governmentality may be roughly translated as a non-disciplinary form of power arising from an amalgamation of institutions, procedures, analyses, reflections, calculations, and tactics that permit governance over a population, often in respect of large-scale demographic crises, such as pandemics. And although governmentality may have certain resonances and interactions with Foucault’s earlier notions of sovereignty and discipline, governmentality is more about mundane, meticulous and minute techniques that form an overall macrophysics of power. The paper will demonstrate that, pursuant to this interpretation of Foucault, modern ICL has developed not as an assiduous strategy for maintaining supranational control, but as an organic outgrowth of lower-level transnational networks that have reached critical mass through the process of governmentality. At the outset, those networks consist of low-level, and often informal, investigative, prosecutorial, and judicial trans-border personnel linkages enabled through the intercession of nongovernmental and international organizations. These networks ultimately facilitate the series of procedures, analyses and tactics that have reached critical mass in the formation of ICL. When seen from this alternative Foucauldian perspective, ICL is no longer a simple binary power-oppression mechanism operating via punishment on a supranational scale. Instead, it represents a matrix of local-global/global-local capacity building, multi-layered enforcement techniques, and convergences of rules and strategy. “Power” in this context can thus be interpreted as a supranational normative and institutional glue that helps situate the erosion of atomistic Westphalian sovereignty and the elevation of individual criminal responsibility as a policy lodestar. At the same time, proposing a governmentality-focused approach entails turning away from ICL’s traditional, and stale, individual criminal responsibility-centered model and re-conceiving it as a victim-focused institutional/procedural strategy utilized to protect at-risk masses from the scourges of genocide, crimes against humanity and war crimes.

About the Speaker:
Gregory S. Gordon is Professor of law at the Chinese University of Hong Kong (CUHK) Faculty of Law. He formerly served as CUHK Law’s Associate Dean (Development/External Affairs) and Director, Research Postgraduates Programme. He earned his Bachelor of Arts degree (summa cum laude) and Juris Doctor at the University of California at Berkeley. After a stint as a litigator in San Francisco, he worked with the Office of the Prosecutor for the International Criminal Tribunal for Rwanda, where he served as Legal Officer and Deputy Team Leader for the landmark “Media” cases, the first international post-Nuremberg prosecutions of radio and print media executives for incitement to genocide. In 2003, he joined the DOJ Criminal Division’s Office of Special Investigations, where he helped investigate and prosecute Nazi war criminals and modern human rights violators. His scholarship focuses on international criminal law, including its history, philosophy, and substantive/procedural development. During his university studies at Berkeley, he wrote a Senior Honors Thesis on Michel Foucault’s History of Sexuality. More recently, he published the piece “Transnational Governmentality Networking: A Neo-Foucauldian Account of International Criminal Law” in the influential volume Philosophical Foundations of International Criminal Law (Bergsmo & Buis, eds, 2018). He is currently working on a biography of the last surviving Nuremberg prosecutor titled Nuremberg’s Citizen Prosecutor: Benjamin Ferencz and the Birth of International Justice. He is one of the world’s foremost authorities on incitement to genocide and his book Atrocity Speech Law: Foundation, Fragmentation, Fruition (Oxford University Press 2017), introduced a paradigm-shifting framework for understanding the relationship between hate speech and international crimes. Professor Gordon won the CUHK Research Excellence Award in 2018 and is the recipient of a CUHK Project Impact Enhancement Fund (PIEF) grant for work with Yale University’s Genocide Studies Program to convert Atrocity Speech Law into a website (Phase 1), and later, a traveling physical exhibition (proposed Phase 2).

CPD credit is available upon application and subject to accreditation by the Law Society of Hong Kong (currently pending).