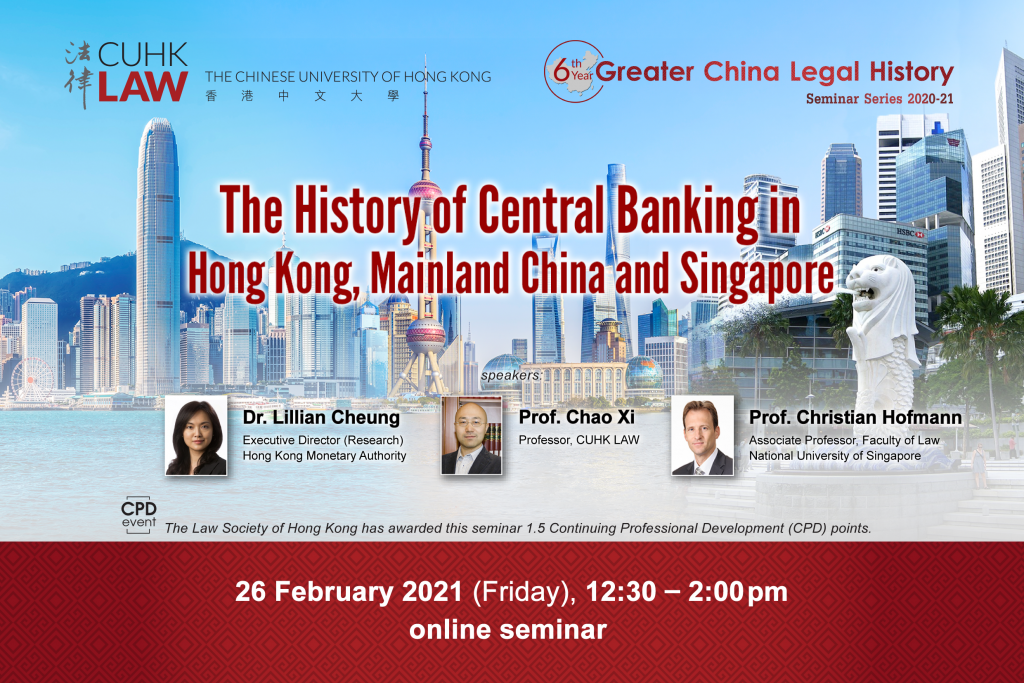 Central banking plays a central part in a modern economy. Central banking institutions are typically entrusted with the making and/or implementation of monetary policy that seeks to strike a delicate balance between sometimes competing objectives, such as price stability (“healthy” inflation), employment (reasonably low unemployment), and economic growth (in particular sustainable growth). They also play an important role in ensuring the stability of the financial infrastructure and system in an economy. In some jurisdictions, central banking institutions are also tasked with supervising commercial banks and other financial institutions. The Global Financial Crisis in 2008-9 and the still ongoing Covid-19 pandemic have thrust central banking into the spotlight, as their operations bear prominently on financial markets and social welfare and must therefore be subject to public accountability. This seminar offers a look into the historical trajectories of central banking in three of the major Asian economies: Hong Kong, Mainland China and Singapore. The speakers will share their insights into how central banking has evolved in these three economies in their own unique historical, economic, social and political settings. The seminar therefore provides a historical lens through which the relevance and challenges of central banking in the three economies are better understood.

Dr. Lillian Cheung JP is Executive Director, Research Department, Hong Kong Monetary Authority (HKMA), as well as Executive Director, Hong Kong Institute for Monetary and Financial Research. Dr. Cheung is responsible for research on issues related to monetary and financial stability. She holds a PhD in Economics from the University of Wollongong, Australia. She first joined the HKMA as Manager in 1998 and was promoted to Division Head in 2010, in charge of research relating to macroeconomic and financial stability issues. She was appointed to her present position in April 2015.

Prof. Chao Xi is Professor and Outstanding Fellow of the Faculty of Law at The Chinese University of Hong Kong, where he concurrently serves as Associate Dean (Research) and Head of Graduate Division of Law. Professor Xi specializes in comparative corporate law, securities regulation, and financial regulation, with a particular focus on the case of China. He has published extensively in leading peer-reviewed international journals. His research has received significant funding support from the Hong Kong SAR Government Research Grants Council, and other funding agencies. He has been appointed by the Policy Innovation and Co-ordination Office (PICO) of the Hong Kong SAR Government to serve on the Assessment Panel of its Public Policy Research (PPR) and Strategic Public Policy Research (SPPR) Funding Schemes.

Prof. Christian Hofmann is Associate Professor at the NUS Faculty of Law. Prior to joining NUS, he was a senior legal counsel for the German Central Bank and a Professor for Private and Business Law at the Private University in the Principality of Liechtenstein (UFL). He held several further research and teaching appointments with law faculties in Europe, North America and Asia, among them as a Global Research Fellow at New York University School of Law, Visiting Scholar and Humboldt Fellow at University of California, Berkeley, School of Law, and Visiting Fellow of the Commercial Law Centre at Harris Manchester College, University of Oxford. Prof. Hofmann holds seven law degrees from three jurisdictions. His research interests are in Banking Law, Financial Regulation, Comparative Company Law, European Union Law and Comparative Private Law in Civil Law systems. He has published two books and over 30 journal articles, is the co-editor of one book and has contributed more than 30 chapters to edited volumes.