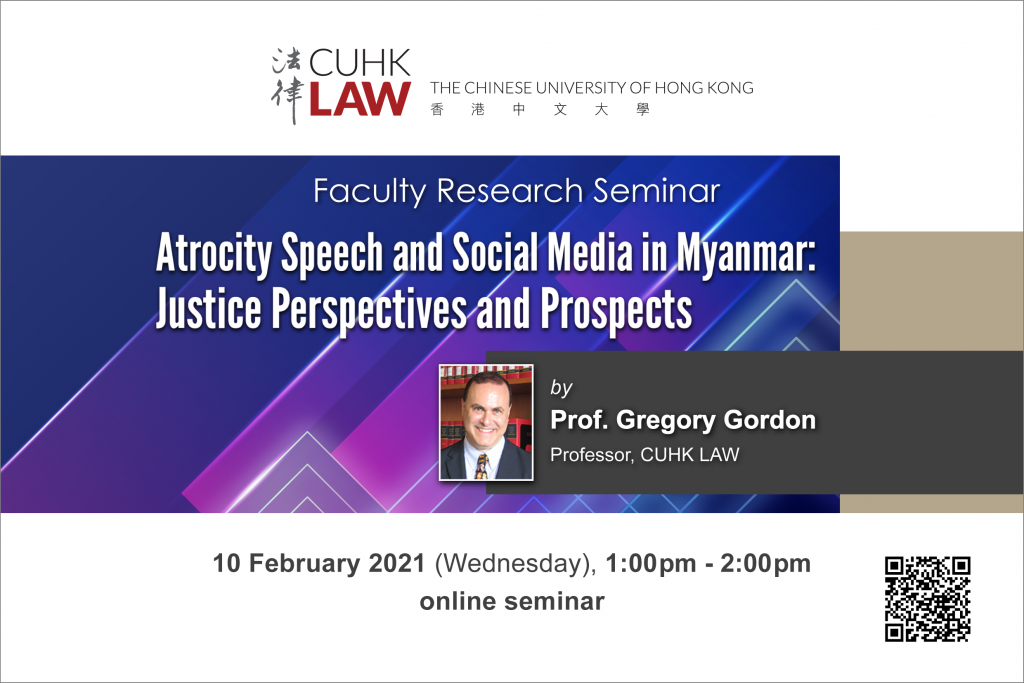 Hate speech has been a prominent feature of the horrific persecution campaign against the Rohingya Muslims in Myanmar (Burma). Verbally attacked, often to the point of dehumanization, by various sectors of Burmese society, including Buddhist monks, the military and ordinary citizens, the Rohingya have been murdered, raped, driven from their villages and homes, and forced into exile. The hate speech that has fueled these international crimes has been disseminated primarily via social media, especially Facebook. Existing atrocity speech legal principles developed during the work of the ad hoc tribunals for the former Yugoslavia and Rwanda were developed in the context of atrocity speech campaigns conducted through traditional print media, radio and television. What can the existing law tell us about how to analyze the prospects for eventual justice in Myanmar? How will the law need to develop? The presentation will provide background regarding the plight of the Rohingya Muslims, the Burmese atrocity speech campaign against them, and then engage in an analysis of how the speech might be treated in the justice sector. If justice efforts were undertaken, in what jurisdictions might they be viable? And might we need to modify the law for those efforts to be successful? If so, how? The presentation will conclude with suggestions for legal reform and reflections on the significance of the Myanmar case for the greater development of the law and the fight against the culture of impunity.

About the speaker:
Gregory S. Gordon is Professor of law at the Chinese University of Hong Kong (CUHK) Faculty of Law. He formerly served as CUHK Law’s Associate Dean (Development/External Affairs) and Director, Research Postgraduates Programme. He earned his Bachelor of Arts degree (summa cum laude) and Juris Doctor at the University of California at Berkeley. After a stint as a litigator in San Francisco, he worked with the Office of the Prosecutor for the International Criminal Tribunal for Rwanda, where he served as Legal Officer and Deputy Team Leader for the landmark “media” cases, the first international post-Nuremberg prosecutions of radio and print media executives for incitement to genocide. In 2003, he joined the DOJ Criminal Division’s Office of Special Investigations, where he helped investigate and prosecute Nazi war criminals and modern human rights violators. His scholarship focuses on international criminal law, including its history and substantive/procedural development. He is currently working on a biography of the last surviving Nuremberg prosecutor titled “Nuremberg’s Citizen Prosecutor: Benjamin Ferencz and the Birth of International Justice.” He is one of the world’s foremost authorities on incitement to genocide and his book “Atrocity Speech Law: Foundation, Fragmentation, Fruition” (Oxford University Press 2017), introduced a paradigm-shifting and influential framework for understanding the relationship between hate speech and international crimes. Professor Gordon won the CUHK Research Excellence Award in 2018 and is the recipient of a CUHK Project Impact Enhancement Fund (PIEF) grant for work with Yale University’s Genocide Studies Program to convert “Atrocity Speech Law” into a website (Phase 1), and later, a traveling physical exhibition (proposed Phase 2).