Faculty Online Seminar – ‘The World Court at (nearly) 100: Reflections on a Century of International Adjudication’ by Prof. Christian J. Tams 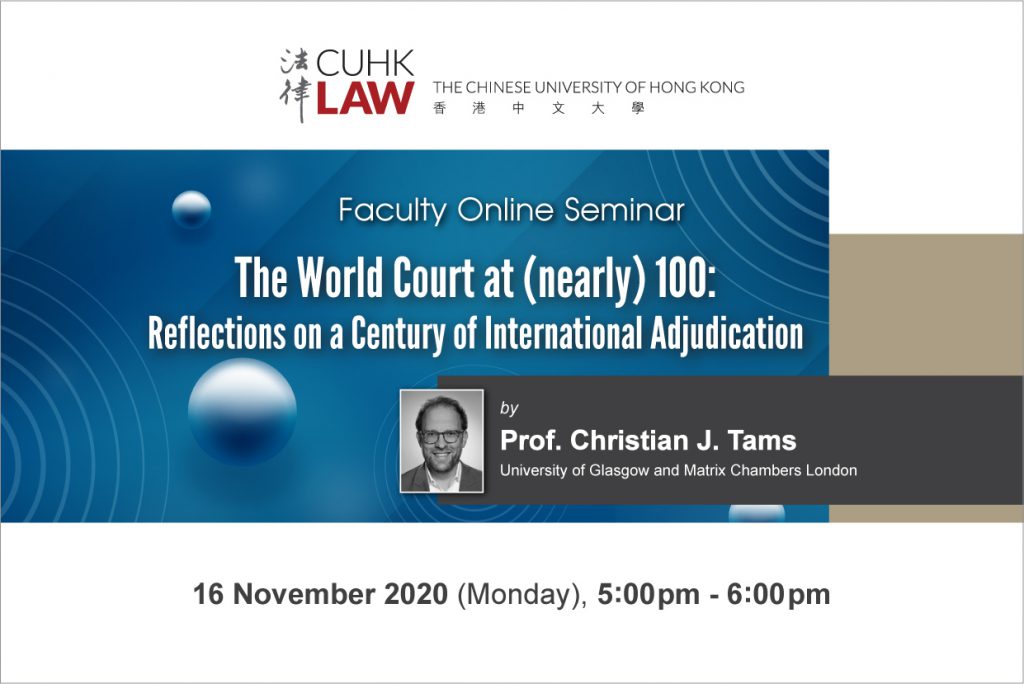 Faculty Online Seminar – ‘The World Court at (nearly) 100: Reflections on a Century of International Adjudication’ by Prof. Christian J. Tams

‘We should … fall upon our knees and thank God that the hope of ages is in process of realization‘ — wrote James Brown Scott, one of the founders of the American Society of International Law, 100 years ago. The reason for his exuberance? The States of the World had begun to get serious about the establishment of a ‘World Court’, the Permanent Court of International Justice (PCIJ). The PCIJ became operational in 1922/1923, and since then, has rendered judgments in inter-State cases and responded to requests for advisory opinions — first as the PCIJ, then, from 1946 onwards, in the World Court‘s second incarnation, as the International Court of Justice (ICJ).

In this talk, Professor Tams will offer comments on the World Court‘s role and record over a century of international adjudication. As a century is not easily summarised, this will have to be a very condensed account — but one not short on points of drama. The condensed account is meant to encourage reflection on the current state of inter-state dispute settlement and the evolving functions of international courts.

About the Speaker:
Christian J. Tams is Professor of International Law at the University of Glasgow where he directs GCILS, the Glasgow Centre for International Law & Security. (weblink: https://gcils.org/)He is also an academic member of Matrix Chambers, London. Christian’s scholarship focuses on dispute settlement, investment law and State responsibility. Recent works include a new edition of The Statute of the International Court of Justice (Zimmermann/Tams, Oxford 2019,) one of the leading texts on the law and procedure of the World Court. In addition this academic work, Christian is frequently instructed in inter-State and investment disputes, and in recent years, has acted in proceedings before the International Court of Justice, the Iran-US Claims Tribunal and arbitral tribunals. He is a long-suffering supporter of a once-successful football team, the Hamburger Sport-Verein.