Faculty Online Seminar – “The Energy Charter Treaty: what can it offer to major energy producing and consuming countries such as China?” by Mr. Graham Coop 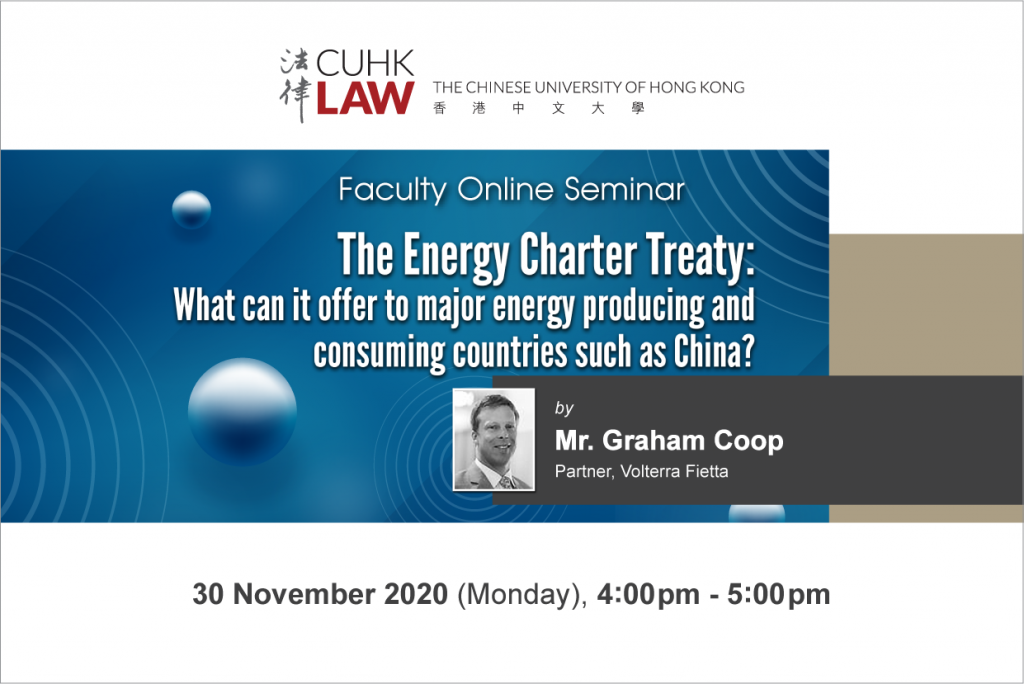 Faculty Online Seminar – “The Energy Charter Treaty: what can it offer to major energy producing and consuming countries such as China?” by Mr. Graham Coop

The Energy Charter Treaty is the world’s only sector-specific multilateral treaty covering all aspects of the energy cycle, including trade, investment, energy transit and energy efficiency, with binding dispute resolution provisions.  Since its signature in 1994 the Treaty has attracted ever-growing attention from governments, investors, energy consumers and civil society groups, all of whom have become increasingly aware of the opportunities the Treaty offers and also of the risks it can create for energy market participants and States acting in ignorance of its provisions.  The Treaty now has over 50 member States together with the European Union and has generated over 130 investor-State arbitration cases.

About the Speaker:
Graham is qualified as a barrister and solicitor in New Zealand and as a solicitor with higher rights of audience (Civil) in England and Wales. He advises and represents companies, governments and international organisations on international dispute resolution and public international law, with a particular focus on the energy, natural resources and infrastructure sectors, together with environmental, banking and defence issues. Before joining Volterra Fietta, Graham served for seven years as General Counsel to the Energy Charter Secretariat, a Brussels-based international organisation responsible for the Energy Charter Treaty. As General Counsel, Graham participated in intergovernmental negotiations on emergency dispute resolution issues and energy transit. He also led the development of the Model Agreements for Cross-Border Pipeline Projects and for Cross-Border Electricity Projects. Graham is recognised globally as one of the world’s leading experts on international energy law, the Energy Charter Treaty and international investment arbitration. Graham has written and edited a wide range of publications, including “Energy Dispute Resolution: Investment Protection, Transit and the Energy Charter Treaty”. Graham is an Honorary Associate of the Graduate School of Natural Resources Law, Policy & Management of the University of Dundee’s Centre for Energy, Petroleum and Mineral Law and Policy.