Faculty Online Seminar – “Out of Africa: How Yash Ghai Came to Think About Human Rights in Hong Kong” by Dr. Coel Kirkby 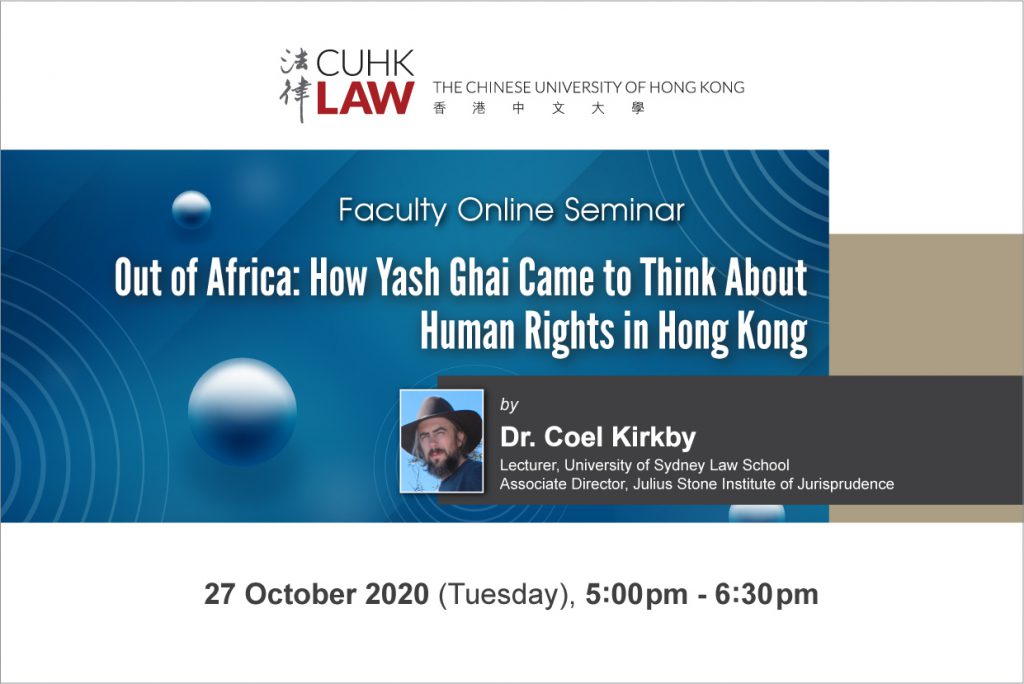 Faculty Online Seminar – “Out of Africa: How Yash Ghai Came to Think About Human Rights in Hong Kong” by Dr. Coel Kirkby

‘I believe,’ wrote Yash Ghai, the inaugural Sir YK Pao Professor of Public Law at the University of Hong Kong, ‘that rights are historically determined and are generally the result of social struggles.’ In this talk, I will aim to understand how Ghai came to make his interventions in debates over human rights regarding ‘Asian values’ and the Basic Law in the 1990s. His interventions came out of an attempt to reconcile his liberal common law training with his later exposure to Marxists analyses of law. Ghai insisted on grounding any critical legal analysis in its particular historical context. For him this was crucial since he was himself born a British subject in colonial Kenya and was painfully aware of the persistence of the colonial political economy after independence. Human rights were not universal, but aspirational—always grounded in local struggles against particular forms of (post)colonial governance. In this analysis the ‘Asian Values’ debate was simply wrong-headed since it pitted two ideals or universals against each other. Instead, Ghai argued that to understand human rights in Hong Kong we must first study the history of colonial governance, and then examine how human rights could assist in overcoming this institutional legacy to promote liberal values.

Dr. Coel Kirkby is a Lecturer at the University of Sydney Law School and the Associate Director of the Julius Stone Institute of Jurisprudence. He was elected the Smuts Research Fellow in Commonwealth Studies at the University of Cambridge for 2017-8. Before that he was a McKenzie Fellow at Melbourne Law School, an Endeavour Fellow at UNSW and a researcher at the Dullah Omar Institute in Cape Town, South Africa. Coel is both a historian of the legal thought and practice of British imperialism and its aftermath, and a comparative constitutional scholar concerned with its postcolonial legacies. He also worked for Fiji Constitution Commission (2012-3).