Faculty Online Seminar – ‘And the Laws are Rude, Crude, and Uncertain’: Extraterritoriality and the Emergence of Territorialised Statehood in Siam by Dr. Ntina Tzouvala 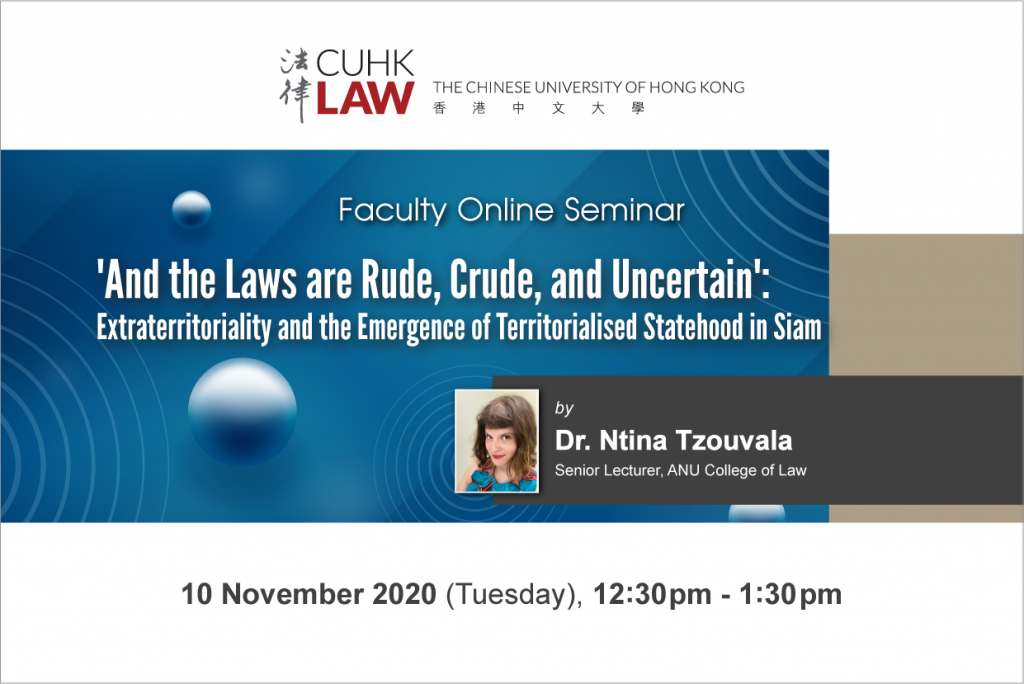 Faculty Online Seminar – ‘And the Laws are Rude, Crude, and Uncertain’: Extraterritoriality and the Emergence of Territorialised Statehood in Siam by Dr. Ntina Tzouvala

This talk reconstructs the international legal struggles over the imposition and abolition of extraterritoriality in 19th- and early 20th-century Siam. In so doing, Dr. Tzouvala advances two inter-related arguments. First, the debates about extraterritoriality were expressed through the idiom of the ‘standard of civilisation’, understood as a constant argumentative oscillation between two seemingly contradictory but mutually-reinforcing positions. On the one hand, legal and political reforms associated with capitalist modernity were deemed necessary for the abolition of the practice. On the other, this abolition was constantly deferred based on culturalist and racist arguments about the purported Siamese barbarity, inferiority and disorder.

Secondly, Dr. Tzouvala posits that extraterritoriality became the juridical means through which an unstable, contradictory, yet consequential alliance between the Siamese monarchy, Siamese elites, and British capital came into being. By examining the legacy of the International Court of Lanna, this paper argues that far from being a violation of or departure from some pre-existing territorial sovereignty, extraterritoriality contributed to the crafting of Siamese territorialised political control over its northern provinces. Importantly though, this form of political authority emerged through the subjugation of nature, the dispossession of indigenous populations and the exploitation of domestic and foreign labour.

Dr. Ntina Tzouvala is a Senior Lecturer at the ANU College of Law. Prior to this, she was a Laureate postdoctoral fellow at Melbourne Law School. Her work focuses on the political economy of international law, with a particular interest in the intersections between law, race/ism and global capitalism.  Her first monograph, Capitalism as Civilisation: A History of International Law, will be published by Cambridge University Press in November 2020.