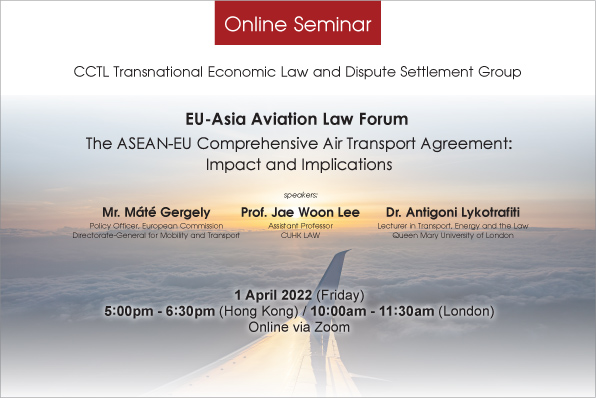 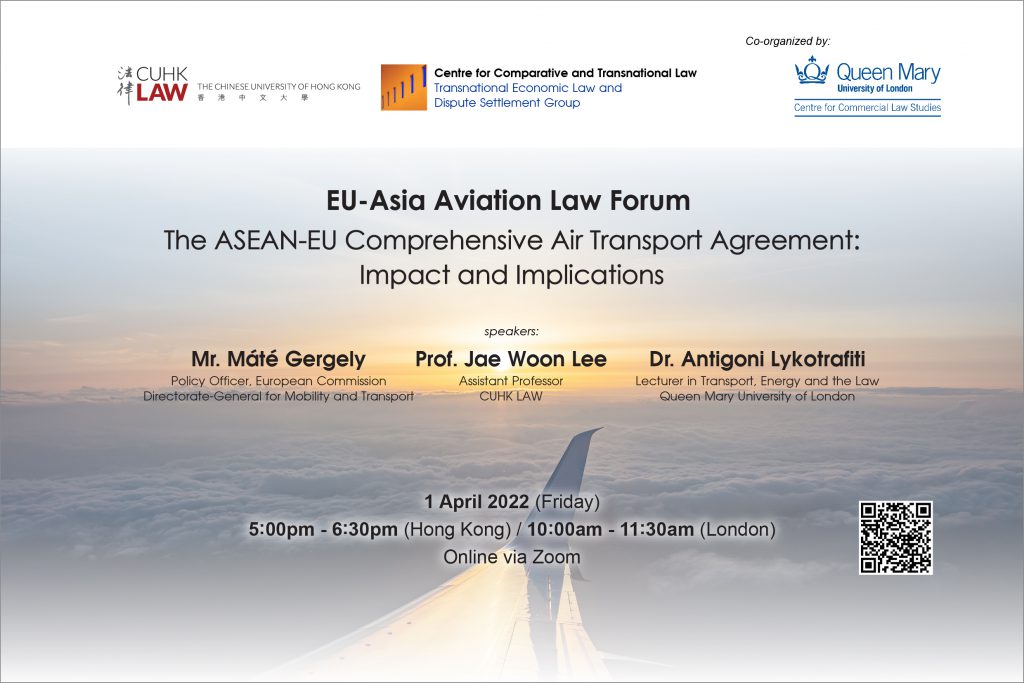 Jointly organized by CUHK LAW CCTL and ​the Centre for Commercial Law Studies ​in Queen Mary University of London, the EU-Asia Aviation Law Forum aims to engage in debates on aviation law issues in the EU and Asia. The 1st EU-Asia Aviation Law Forum will examine the ASEAN-EU Comprehensive Air Transport Agreement (AE CATA). EU and ASEAN concluded the negotiations on the AE CATA in June 2021, and the AE CATA is currently in the final stage for signature. The AE CATA is the world’s first bloc-to-bloc air transport agreement. It will not only bolster connectivity and economic development between the regions, but will also have considerable implications in the rest of the world. In this inaugural forum, three renowned aviation law experts, namely Prof. Jae Woon Lee, Dr. Antigoni Lykotrafiti and Mr. Máté Gergely, will introduce the background of the AE CATA and offer in-depth insight into the various issues of the AE CATA.

Máté GERGELY (born at Budapest, Hungary, 1973) is an aviation enthusiast and expert in international air law and policy. He graduated from the ELTE University of Budapest as Doctor of Law in 1997. He started his career in a small law firm in Budapest, where he worked on the implementation of EU aviation law in view of Hungary’s accession to the European Union. Máté then continued his career as advisor in the Prime Minister’s Office and in the Cabinet of the Minister of Transport before moving on to be legal counsel in MVM Power Companies, the biggest energy firm of the country. He returned to aviation as legal counsel at Malév, the national airline of Hungary.

In 2003, he joined the European Commission’s Directorate-General for Transport, now DG MOVE, in international aviation negotiations (US, Canada, Balkan States etc.) and the regulation of the EU internal air transport market (Regulation 1008/2008). In 2010, he returned to his home country to serve as Director General of Civil Aviation responsible for international relations, policy- and law-making in aviation. Between 2012 and 2018, he worked again in DG MOVE in international aviation relations. From 2018 to 2020 Máté was a senior expert in economic regulation at ICAO (International Civil Aviation Organization). Since 2020, he has worked in the Aviation Security Unit of DG MOVE as secretary to the EU Aviation Security Committee, and dealing with international engagements and cybersecurity.

As part of his academic activities, Máté has given lectures at universities and several air law and policy events and has published articles on air law.