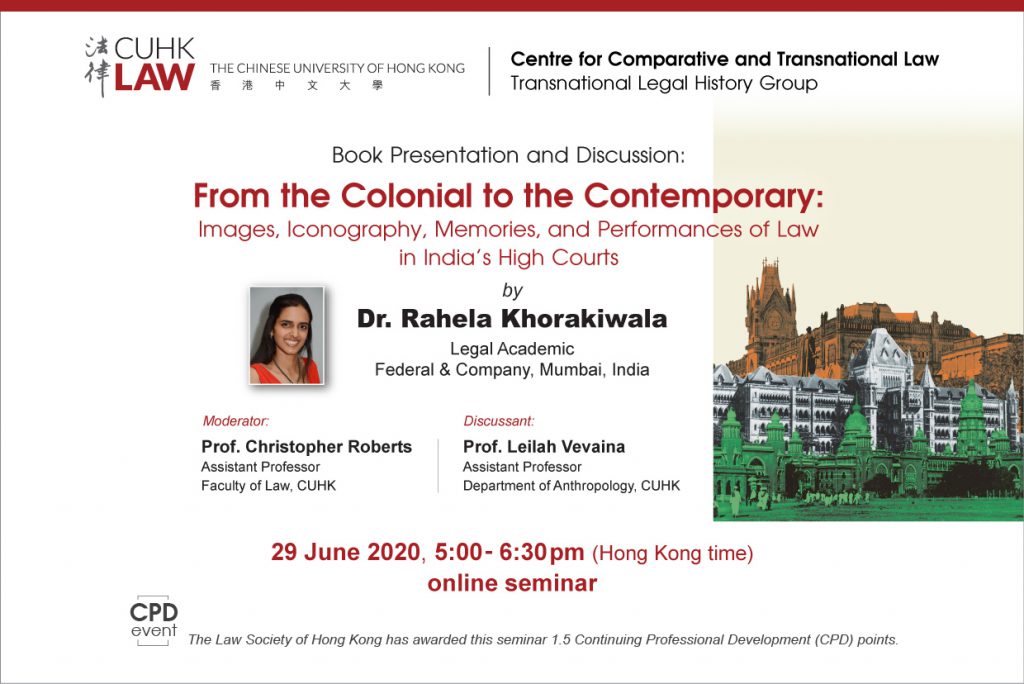 From the Colonial to the Contemporary  explores the representation of law, images and justice in the first three colonial high courts of India at Calcutta, Bombay and Madras. It is based upon ethnographic research work and data collected from interviews with judges, lawyers, court staff, press reporters and other persons associated with the courts.

Observing the courts through the in vivo, in trial and practice, the book asks questions at different registers, including the impact of the architecture of the courts, the contestation around the renaming of the high courts, the debate over the use of English versus regional languages, forms of addressing the court, the dress worn by different court actors, rules on photography, video recording, live telecasting of court proceedings, use of CCTV cameras and the alternatives to courtroom sketching, and the ceremony and ritual that exists in daily court proceedings.

The three colonial high courts studied in this book share a recurring historical tension between the Indian and British notions of justice. This tension is apparent in the semiotics of the legal spaces of these courts and is transmitted through oral history as narrated by those interviewed. The contemporary understandings of these court personnel are therefore seen to have deep historical roots. In this context, the architecture and judicial iconography of the high courts helps to constitute, preserve and reinforce the ambivalent relationship that the court shares with its own contested image.

About Speaker:
Dr. Rahela Khorakiwala is a lawyer by training, having completed her law degree in India and her LLM at New York University School of Law. Rahela has worked as a legal consultant with the Ministry of Foreign Affairs in New Delhi and the World Bank in Kabul. She has completed the integrated MPhil/PhD from Jawaharlal Nehru University, New Delhi where she did an ethnographic study of the colonial courts of India, studying them as a legal anthropologist. Rahela has eight publications to her credit, including peer-reviewed contributions to the Indian Law Review and the Asian Journal of Law and Society. Her research has an extensive outreach as she has presented her work at several conferences across the world.  After completing a postdoctoral fellowship at the Max Planck Institute in Frankfurt, Rahela has most recently published her first book titled, From the Colonial to the Contemporary: Images, Iconography, Memories, and Performances of Law in India’s High Courts.