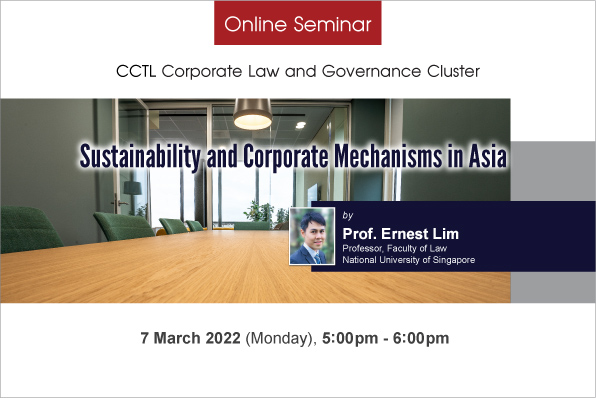 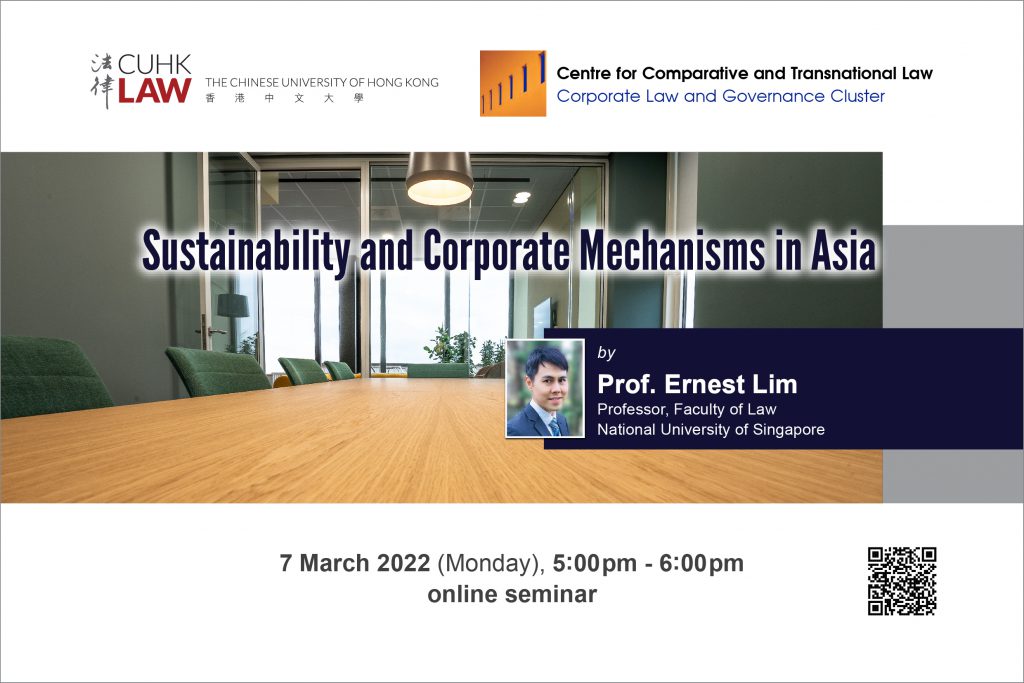 This talk analyses why and how six corporate mechanisms—(1) sustainability reporting; (2) board gender diversity; (3) constituency directors; (4) stewardship codes; (5) directors’ duty to act in the company’s best interests; and (6) liability on companies, shareholders and directors—have been or can be used to promote sustainability in four leading common law jurisdictions in Asia (Singapore, Hong Kong, India and Malaysia). A central challenge is, whether and if so, how the corporate mechanisms should be reconceptualised to promote sustainability in an environment that is characterised by controlling shareholders, particularly the government in state-owned enterprises. Because controlling shareholders are the norm for the majority of the world’s companies, and state-owned enterprises play a significant role, this talk provides important insights on the problems and prospects of advancing sustainability in concentrated and mixed ownership jurisdictions.

Ernest Lim is Professor at the Faculty of Law, National University of Singapore (NUS). He obtained his D.Phil. and B.C.L. from Oxford, LL.M. from Harvard and LL.B. from NUS. He has published widely on comparative corporate law and governance as well as private law. He is the author of three monographs with Cambridge University Press: A Case for Shareholders’ Fiduciary Duties in Common Law Asia (2019), which won the Society of Legal Scholars Peter Birks Runner-up Prize for Outstanding Legal Scholarship; Sustainability and Corporate Mechanisms in Asia (2020); and Social Enterprises in Asia: A New Legal Form (2022, forthcoming). He is also co-editor of The Cambridge Handbook of Private Law and Artificial Intelligence (CUP, forthcoming). He has been elected to the Robert S Campbell Visiting Fellowship at Magdalen College, Oxford. He has held visiting appointments at the Max Planck Institute for Comparative and International Private Law, King’s College London, and Columbia Law School. Prior to joining academia, he worked in the New York and Hong Kong offices of Davis Polk where he specialised in global capital market transactions.