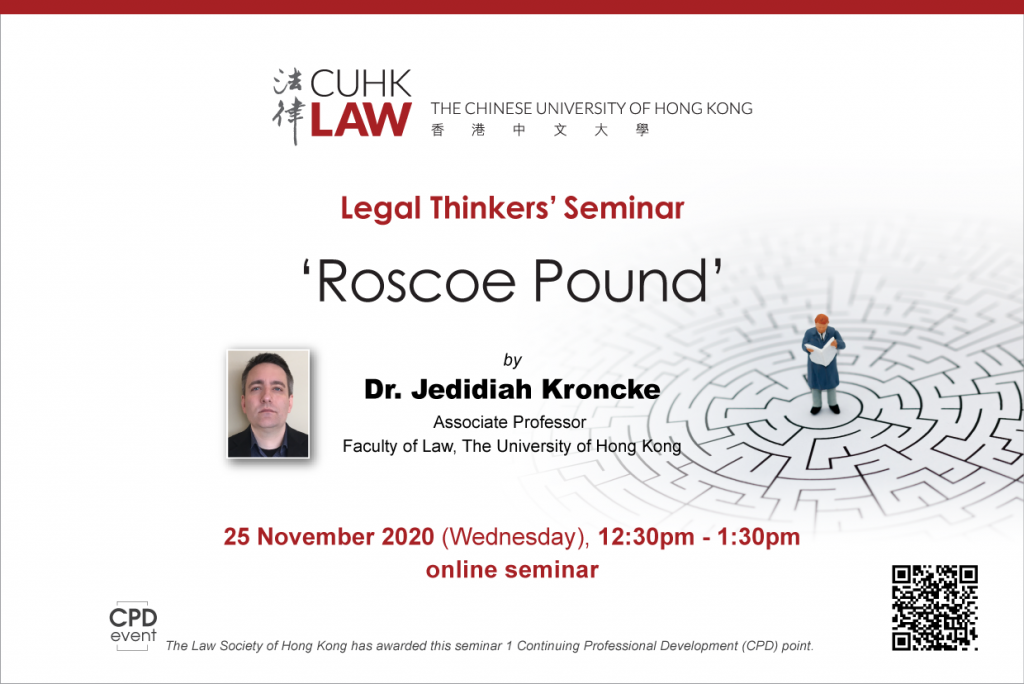 CUHK LAW announces the second Legal Thinkers’ Seminar ‘Roscoe Pound’, to be held on 25 November 2020, 12:30 – 1:30pm. It will be delivered by Dr. Jedidiah Kroncke, Associate Professor, Faculty of Law, The University of Hong Kong.

Abstract:
Few scholars touched on so many key areas of early 20th-century American law as the inimitable Roscoe Pound. In tandem, few have stirred so much controversy and invited so many attempts to coherently explain his wide-ranging career. Pound began his career as an critic of the American common law embraced by Progressives, and then ended his career a critic of American administrative law embraced by McCarthyite conservatives. This talk with place the different phases of Pound’s influential career and his centerpiece concept of sociological jurisprudence in the context of his continued commitment to the common law judge as mediator between the law and social change. It will highlight the tensions this consistent commitment played in his clash with his various intellectual interlocutors, most notable Legal Realism, as well as the underappreciated but illuminating impact of his relationship to China during the era of the Chinese Civil war.

About the Speaker:
Dr. Jedidiah Kroncke
Dr. Jedidiah Kroncke is an associate professor of law at the University of Hong Kong, joining the faculty in August of 2018. He currently teaches property, equity and trusts, as well as courses in common law reasoning for civil law students. Previously, he was a professor at FGV Sao Paulo School of Law, and before this he was the Senior Fellow at the East Asian Legal Studies Program at Harvard Law School.

Register here by 5 pm, 24 November to attend the seminar.