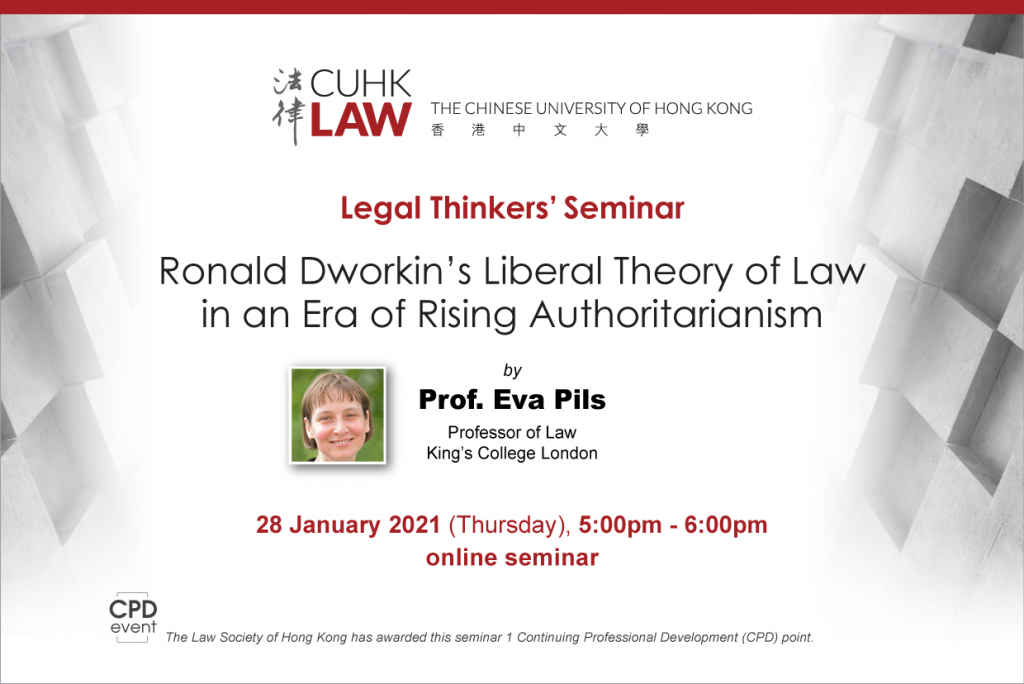 CUHK LAW announces the third Legal Thinkers’ Seminar ‘Ronald Dworkin’s Liberal Theory of Law in an Era of Rising Authoritarianism’, to be held on 28 January 2021, 5:00pm – 6:00pm. It will be delivered by Prof. Eva Pils, Professor of Law, King’s College London.

Abstract:
The late philosopher Ronald Dworkin (1931-2013) argued that rights were central to the very idea of law, understood as a social practice whose point was to limit state coercion. He defended an egalitarian conception of liberalism as a political theory universal in its claims, contesting more limited conceptions of liberalism such as that of John Rawls. What can we learn from his theory in an age shaped by globalisation and the rise of authoritarian China?

About the Speaker:
Eva Pils is Professor of Law at King’s College London and an affiliated scholar at the US-Asia Law Institute of New York University Law School. She studied law, philosophy and sinology in Heidelberg, London and Beijing and holds a PhD in law from University College London. Her current research addresses autocratic conceptions and practices of governance and dimensions of legal and political resistance. Her book Human rights in China: a social practice in the shadows of authoritarianism, was published in 2018. Before joining King’s in 2014, Eva was an associate professor at The Chinese University of Hong Kong Faculty of Law.