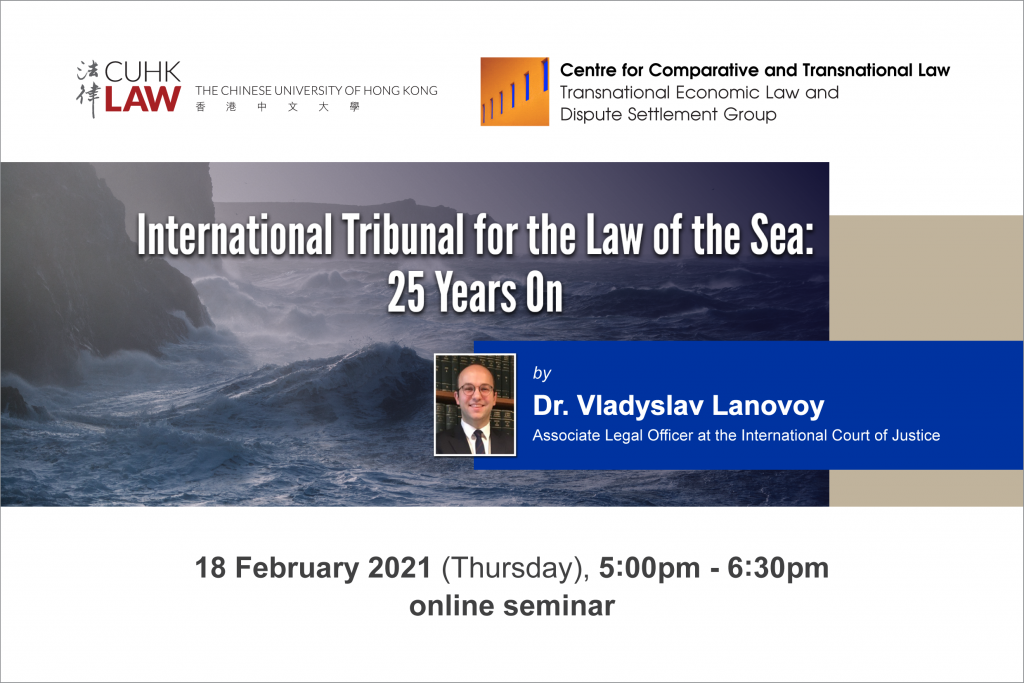 This seminar will examine the role of the International Tribunal for the Law of the Sea (ITLOS) in the settlement of disputes relating to the interpretation or application of the UN Convention on the Law of the Sea in the nearly 25 years that have passed since its entry into force. It will consider the context in which ITLOS operates alongside other dispute settlement mechanisms foreseen in the convention. The seminar will critically assess the substantive contributions of ITLOS to the legal regime governing the oceans, as well as the procedural innovations in its working methods that may serve as a model for other international courts and tribunals. Finally, it will consider the present and future challenges for ITLOS.

About the Speaker:
Dr. Vladyslav Lanovoy is an Associate Legal Officer at the International Court of Justice and will be joining the Faculty of Law at Laval University, Quebec, Canada in 2021 as a Professor of Public International Law. He has also been a Lecturer at Lille Catholic University and a Teaching Fellow at Queen Mary University of London. He holds a PhD in international law from the Graduate Institute of International and Development Studies in Geneva and is the author of Complicity and its Limits in the Law of International Responsibility (Hart 2016), which was awarded the 2017 Paul Guggenheim Prize in International Law. He has previously worked in international arbitration at Freshfields Bruckhaus Deringer LLP and at the Permanent Court of Arbitration. He has also consulted for the UN Office of the High Commissioner for Human Rights and the UN Environment Programme. His research interests include the law of international responsibility, dispute settlement, the law of the sea, human rights law and international economic law. He is a national of Ukraine and Portugal and is qualified to practise law as a solicitor in England and Wales.