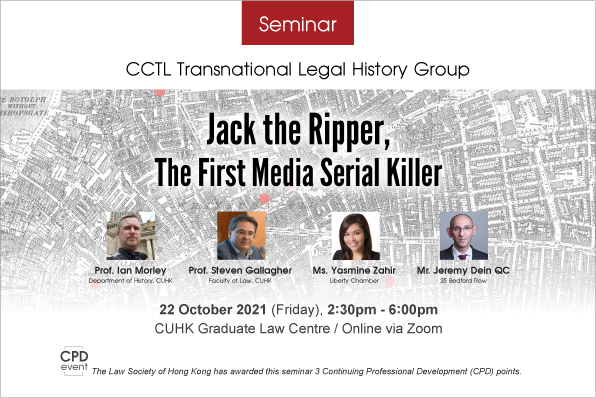 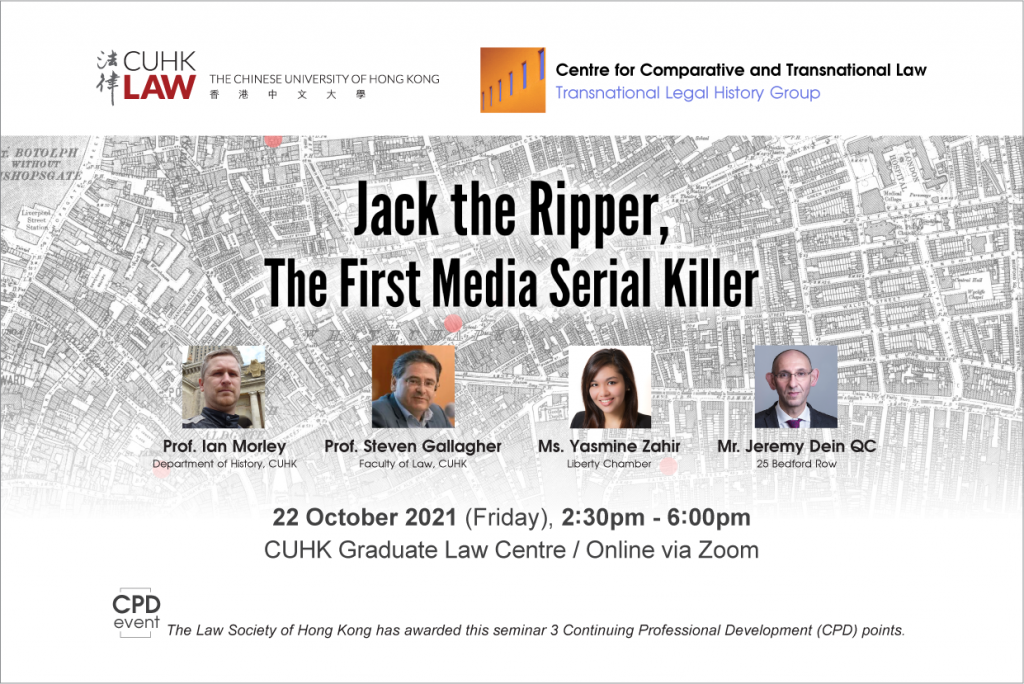 In the late summer of 1888, London was the setting for a series of gruesome murders. Five women, often characterised as prostitutes, were subject to various mutilations as part of their murders. These crimes were never solved and no one was ever prosecuted for them, however, the perpetrator has become infamous under the contemporary pseudonym, “Jack the Ripper”.

This seminar will consist of three parts. The first hour will consider the legal and historical issues surrounding this series of murders and the never identified killer. In particular, why the murders perpetrated by Jack, or Jill, caught the attention of the public to the extent that his identity is still the subject of speculation today, 133 years after the crimes. In the second hour of the seminar, one of Hong Kong’s foremost young counsel and CUHK LAW alumna, Yasmine Zahir, Barrister, Liberty Chambers, will consider the continued fascination with serial killers around the world, focusing on Hong Kong’s notorious serial killers- “The Jars Murderer”, The Tuen Mun Rapist” and, although technically not a serial killer, Rurik Jutting. In the final part, Jeremy Dein QC, media expert and personality, and one of Britain’s most experienced and highly regarded criminal defence counsel, will consider the issues that may have arisen if Jack or Jill had been caught and brought to trial. This will include contemporary and present-day evidential issues and what defences might have been run to defend the seemingly indefensible.

Jeremy Dein QC has been practising as a UK criminal barrister since 1983. He is co-head of 25 Bedford Row, London, Britain’s largest and most established specialist defence chambers.

Throughout his career, Jeremy has appeared in all types of criminal trials.  He   specialises    in   homicide, sexual offences, and all manner of   serious, complex crime. He has often   appeared in high   profile cases attracting the media spotlight, and features regularly on national TV and radio as a criminal justice, Human rights, and news commentator. He has a special interest in appellate work and has massive court of appeal experience.

Jeremy is lead investigating defence counsel and co- presenter in the highly successful, award winning BBC documentary series “Murder, Mystery and my family”, an examination of the safety of UK, historic death penalty convictions. The series was awarded Daytime factual TV programme of the year, 2019, and has now run to 50 episodes.

Jeremy has featured widely on UK radio over the last 20 years. He is a leading expert on Criminal Justice for BBC radio 5 live, radio London, LBC, and Talk radio. He has often reviewed the newspapers, and contributed widely on discussion panels. He is also presenter of the 2020 Podcast series “Criminal Justice on trial”, focusing upon all aspects of the process, including the devastating impact of Covid -19.

Jeremy was appointed Queen’s counsel in 2003. He became a part time trial judge in 2004, now sitting at the “Old Bailey” (Central Criminal Court), trying grave and complicated cases on a regular basis. He also served as a judicial college course tutor for several years.

He has lectured, written, and spoken around the world on advocacy, criminal justice and fair trial related topics, in Asia most particularly, on numerous occasions at the Chinese University of Hong Kong.   He regularly acts as a Moot judge, and trainer, for example, at Law Asia, Hong Kong, 2019.

Jeremy is a former Criminal Bar Association Director of education (2008-12). In December 2020 he was invited to chair the Criminal Bar association’s law reform committee. He is also patron of the Queen Mary College, London University, Criminal Justice society.

Ian Morley is Associate Professor of Urban History at the Chinese University of Hong Kong. His research focuses upon the design of the built fabric in the Philippines during the American colonial era. His publications include Cities and Nationhood: American Imperialism and Urban Design, 1898-1916 (University of Hawai’i Press, 2018) and American Colonisation and the City Beautiful: Filipinos and Planning in the Philippines, 1916–35 (Routledge, 2019), the latter being awarded the 2020 International Planning History Society Koos Bosma Prize in Planning History Innovation. He currently serves as a member of the editorial board for the journal Planning Perspectives. He is a Fellow of the Royal Historical Society, a Fellow of the Royal Society of Arts, and has a Senior Fellowship from Advance HE.

Yasmine is a practitioner in both civil and criminal litigation. She has appeared either as a sole advocate or a led junior counsel before all Magistrates’ Courts, the District Court, the Court of First Instance, the Court of Appeal and the Court of Final Appeal.

Yasmine regularly appears for both the Prosecution and the Defence in a wide range of criminal cases involving the Police, ICAC and Customs and Excise for offences of drugs, assault, immigration, trade mark, road traffic and commercial crime including conspiracy to defraud, falsification of accounts and other fraud-related offences. Yasmine has experience representing police officers in disciplinary enquiries and representing Customs and Excise in conducting forfeiture hearings.

Yasmine has experience conducting cases of personal injury, probate and breach of contracts relating to land disputes and shareholding agreements. Yasmine has represented Incorporated Owners of buildings for issues of water leakage, unauthorized building works and breach of Deeds of Mutual Covenant. Yasmine also conducts cases in the Family Court and represents clients in matrimonial proceedings relating to child disputes and financial disputes on matrimonial assets.

Steven Gallagher is a Professional Consultant, Professor of Practice in Law (by courtesy), and Associate Dean (Academic & Student Affairs). Steven has taught various aspects of property law in England and Hong Kong. In 2013, Steven introduced the Principles of Art, Antiquities, Cultural Heritage and the Law course to the LLM programme at CUHK LAW. Steven presents a range of continuing professional development courses for solicitors in Hong Kong on topics in property law, art law, and law and technology. Steven’s research interests include issues in property law, legal history, the development of policy and law intended to promote and protect art, antiquities and cultural heritage, law and technology, and innovative ways to teach law. The latter includes using superhero films for problem based learning, flipped classrooms and digital learning initiatives promoting asynchronous and distance learning. Steven has been widely quoted in newspapers and television reports regarding legal issues involving art and cultural heritage.