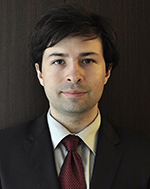 Ryan Mitchell’s research focuses on international law, legal history and theory, and Chinese law. His scholarship has appeared in leading academic journals including the Harvard International Law Journal, the Harvard Human Rights Journal, the Vanderbilt Journal of Transnational Law, and the Asian Journal of Law and Society, and his commentary on legal, political, and cultural topics has also been published in numerous venues. In current research he situates the origins of modern doctrines of sovereignty in the context of late 19th – early 20th century globalization, and examines systemic implications of China’s increasingly active role in public international law.

Professor Mitchell holds a B.A. from the New School, a J.D. from Harvard Law School, and a Ph.D. in Law from Yale University, where he was also an Andrew W. Mellon Foundation Humanities Fellow. While pursuing his doctoral studies at Yale, he taught courses on the history and theory of international law and received the Archaia Qualification in the Study of Ancient and Premodern Cultures and Societies. His dissertation was passed with distinction, and he is currently revising it as the forthcoming book Recentering the World: China’s Reception and Contention of International Law. In his work, he takes a particular interest in exploring the diversity of legal thought as reflected in various cultures, intellectual traditions, and systems of political economy.

His legal practice experience includes Alien Tort Statute litigation in U.S. federal courts, work on immigration and asylum issues, and reports submitted to international human rights bodies. Originally from Los Angeles, he is a member of the State Bar of California.