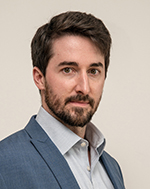 Professor Roberts is an Assistant Professor, Assistant Dean (Undergraduate Studies) and LLB Programme Director within the Faculty of Law at the Chinese University of Hong Kong. Among other themes, Professor Roberts’ research focuses on the historical evolution of public order legality in nineteenth and twentieth century Britain, the British Empire and the British settler colonial world; on the imperial, transnational and international evolution of ideas of workers’ rights in the early to mid-twentieth century; on the boundaries of the concept of forced labor; and on comparative institutional and procedural issues at human rights bodies. He is currently working on a book tentatively titled “Anarchism, Espionage, Syndicalism and Sedition: The Construction of the Anti-Worker State, 1880-1927.” Professor Roberts is the Chair of the Transnational Legal History Group within the Law Faculty’s Centre for Comparative and Transnational Law.