Professor 教授
Outstanding Fellow of the Faculty of Law 法律學院傑出學人 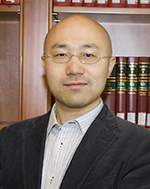 Chao XI is Professor and Outstanding Fellow of the Faculty of Law at The Chinese University of Hong Kong, where he concurrently serves as Associate Dean (Research) and Head of Graduate Division of Law. He also directs the Chinese Law Program of the Hong Kong Institute of Asia-Pacific Studies, CUHK.

Professor Xi specialises in comparative corporate law, securities regulation, and financial regulation, with a particular focus on the case of China. He has published extensively in leading peer-reviewed international journals, including the Banking and Finance Law Review, European Business Organization Law Review, Journal of Business Law, and Journal of Comparative Law, Statute Law Review, and Tort Law Review. His research has received significant funding support from the Hong Kong SAR Government Research Grants Council, the PRC Ministry of Education, the Government of India, and the Sumitomo Foundation. He has been appointed by the Policy Innovation and Co-ordination Office (PICO) of the Hong Kong SAR Government to serve on the Assessment Panel of its Public Policy Research (PPR) and Strategic Public Policy Research (SPPR) Funding Schemes.

Professor Xi holds visiting positions at various leading overseas institutions. He serves on the Editorial Board of a number of international peer-reviewed journals, including The China Review (SSCI-indexed), the Hong Kong Law (SSCI-indexed), and the Journal of Banking and Finance Law and Practice. Professor Xi is also a Member of the Chartered Institute of Arbitrators (CIArb), UK, and is on the panels of arbitrators in several arbitration institutions. He has regularly been engaged by law firms, multinationals, and government departments and agencies as an expert.