Professor
Outstanding Fellow of the Faculty of Law 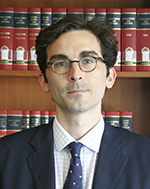 Anatole Boute, PhD in Law (2011, University of Groningen), is a Professor at the Chinese University of Hong Kong, specializing in the fields of energy, environmental and investment law. His research focuses on the legal aspects of the transition of energy systems towards sustainability, with a special interest for energy market reforms in emerging economies.

Anatole Boute graduated in Political Sciences (2003) and Law (2004) from the University of Leuven and holds an advanced master (LLM) in Energy and Environmental Law (2005) from the same university. In 2005, he was called to the Brussels bar where he practiced until 2009 with the Energy Law team of Janson Baugniet. He advised on and was involved in litigation concerning the promotion of renewable energy sources, energy efficiency, greenhouse gas emissions trading, the liberalization of energy markets and nuclear energy.

In January 2011, he defended his PhD on the modernization of the Russian electricity production sector at the University of Groningen under the supervision of Professor Martha Roggenkamp. Based on the results of this research, he advised the United Nations Conference on Trade and Development (World Investment Report 2010), the International Energy Agency (2014 In-Depth Review of the Russian Energy Sector) and the Energy Charter Secretariat (Power Sector Reform in Central Asia). Between 2011 and 2016, he was legal advisor to the International Finance Corporation Russia Renewable Energy Program (The World Bank).

Anatole Boute is the founder of the LLM program in Energy and Environmental Law and is in charge of the program’s coordination.

Anatole Boute is the Principal Investigator of “Greenhouse Gas Emissions Trading in China: Insights from the EU’s Experience” funded by the General Research Fund of Hong Kong (GRF 2016) and of “China’s Shaping of the Eurasian Energy Market: Protecting Chinese Outbound Investments Along the Belt and Road” (GRF 2018). He co-organized the conference on “The Regulation of Energy Investments along the Belt and Road” (2017, CUHK-KAS-ECS).